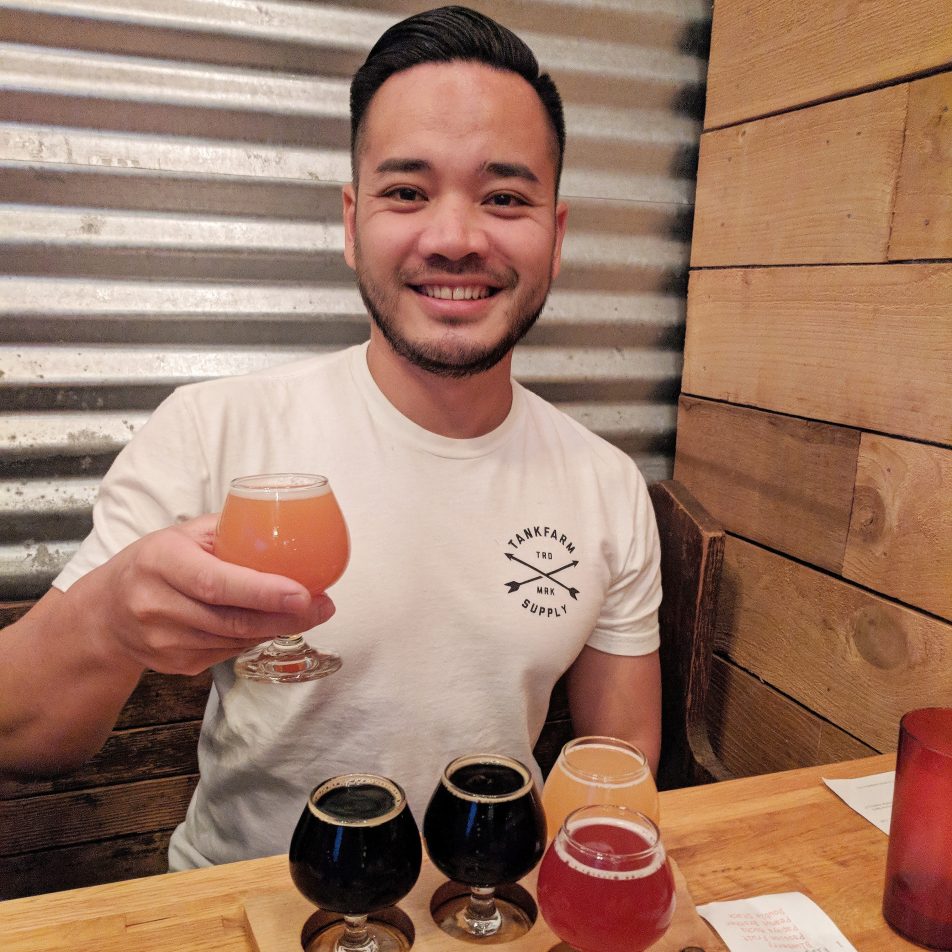 Thien Le, The Mind of a Home Brewer: Hop Talk

The 21st Amendment might’ve repealed Prohibition but there was no legislation to support home brewers  until 1979 ,when Sen. Alan Cranston (D-Wyoming) sponsored a bill signed by President Jimmy Carter that made it legal to make your own suds in the United States. Nowadays, the American Home Brewers Association estimates about 1.1 million home brewers practice their craft, 19% of those on the West Coast.

One of those people is Thien Le. He belongs to the OC Mash Ups, a group that holds their meetings at Barley Forge Brewing Company in Costa Mesa. Thien has only been at it for two years, but he already won a Silver Medal at the National Home Brew Competition in Portland for a Pandan Coconut stout he called Parts Unknown in honor of Anthony Bourdain has given him.

Thien considers himself a perfectionist to the point that he bought a hand-crank canning system that he motorized himself. We recently sat down with a couple of beers or 5 and talked hops and malts.

How long have you been home brewing and what inspired you to brew craft beer?

I have been home brewing for 2 and a half years but I had done my research about brewing for a year prior to starting. Brewing is expensive and very time consuming so I like to be prepared so I don’t lose money and time spent scrubbing pots and waiting 3 weeks for a beer to finish. I am intrigued by how brewing beer is a formation of art and science. I’m very technical and creative person so it fits me very well.

What was your first craft beer that you drank? Did you like it?

The first craft beer I drank was Speakeasy Double Daddy IPA roughly 10 years ago. I was at the Yardhouse watching a Lakers playoff game and some random guy suggested I drink it and that was what got me into craft beers and IPA’s. I really enjoyed how it was bitter, floral, and malty all together. After that day I started ordering IPA’s everywhere I went.

Was there a craft beer that really changed how you thought about beer?

One of the beers that changed how I thought about beer was Alpine Nelson. It was so delicious with hops I’m not used to that it made me want to start brewing beer. I was inspired to create something similar or better. My very first homebrew was named Hurricane Nelson which was my take on a Rye IPA with Nelson hops. My friends and I drank the whole entire keg in one night. That night made me want to brew more beer.

When brewing, do you have a favorite style that you like to brew?

I try to brew all different styles so I can learn from them but I love brewing Saisons, IPA’s and Stouts.

Totally theoretical: if you owned a brewery, would you brew beer that you didn’t like to drink but because it was the “popular” beer you brew it anyways?

There are a lot of breweries going out of business because they aren’t adapting to current trends so if I owned a brewery I would definitely brew what I like but also brew styles that will sell to keep the business going. When I brew, I try to create beers that everyone can enjoy. I’ve had great success with making people enjoy styles they’ve previously disliked.

The coffee you use in your beers is from Arkansas. You also have a background in roasting coffee. Why do you use coffee from that particular roaster?

I use coffee from that particular roaster because I know the amount of passion he has for roasting which translates to a wonderfully curated small batch of coffee. Also, he was the one that taught me about coffee and roasting before my homebrewing days. His name is Ronny Barnett from Rising Tides Coffee.

You recently brewed Parts Unknown with Riip,, and it’s going to the Great American Beer Festival for the Pro-Am competition. How was that experience, and do you see yourself brewing with other established breweries?

It was a great experience in many ways. The owners and head brewer were very welcoming and trusted my beer without trying to change anything. My recipe calls for so many ingredients they are not used to but they were very cool about it. Working with Ian McCall was a blessing because he is such a knowledgeable and very humble guy. He taught me a lot and simplified things so it’s not to overwhelming.

Now for the $64 million dollar question. Are you looking to open your very own brewery?

I understand how hard it is to run a brewery business so I can’t say I’d ever open my own brewery. If I ever happen to meet the right people with the same passion and ideas in the future, I would explore the options of doing so. My main focus is to have fun with brewing and challenge myself to learn and create the best beers I possibly can and not focus trying to make money off it. I see to0 many people trying to capitalize on the current trends by focusing on the business but are lacking passion and quality.

I’d like to thank Thien for taking the time to talk about craft beer. This is the first of many interviews that I will have with both home and commercial brewers.  Teach a man to brew, and he drinks for the rest of his life. Cheers! BobbyKnowsBeer!